Home / Blog / How Do Progressive Jackpots Work? The Ultimate Guide

How Do Progressive Jackpots Work? The Ultimate Guide 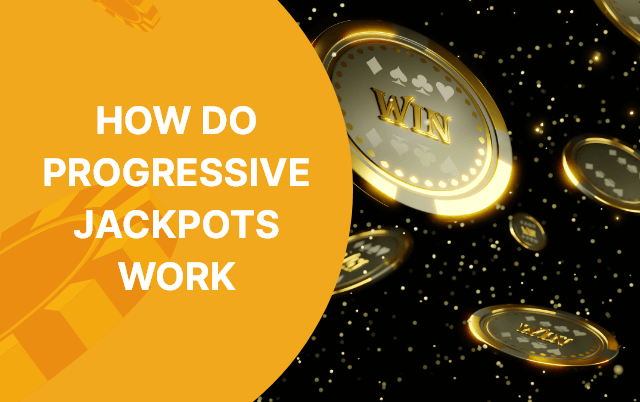 Slot machines and other casino games can be an excellent source of entertainment, but most of us are also keeping an eye on financial aspects. In other words, we are always on the lookout for winning combinations and the sound of coins rattling.

To answer these questions, we came up with a comprehensive guide to progressive jackpots. So, if you want to play these games on the best online casino sites, you came to the right place.

So, what’s the secret to progressive jackpots? How can these games make you a millionaire within seconds? Here’s how.

What Is a Progressive Jackpot?

In essence, games with progressive jackpots will increase rewards as players bet on the game and add to the mutual prize pool. In other words, the pot progresses over time and rises with each new wager.

Namely, players sitting at home and playing slot machines on some of the new slot sites will place bets for each spin. A tiny percentage of those wagers goes to a progressive jackpot. The process continues until a lucky player takes home the big prize.

Below, we’ll explain how often progressive jackpots are won. We’ll also cover the top-rated games in this particular genre, explaining how to get closer to the highly coveted wins. But before moving on to individual games, we should first revisit the basics. For instance, the historical background of progressive games is worthy of attention. Therefore, let’s check it out.

Slot games come with an exhilarating history spanning more than a century. It all started in the late 1800s, when Charles Fey, the Father of Slot Machines, started tinkering with various machines in his workshop. His pioneering efforts and the famous Liberty Bell set in motion a chain of events that led to modern-day progressive jackpot games.

With that said, we should also mention the year 1986, when IGT released the iconic Megabucks slot machine. Since they worked as a group, these slot games didn’t have a fixed jackpot. Instead, the rewards on the Megabucks grew as players pulled the levers on the different devices within the group.

In February 1987, a fortunate slot enthusiast in Reno, USA, collected the first progressive jackpot ($4.9 million). As they say, the rest is history.

How Are Progressive Jackpots Paid?

Nowadays, progressive jackpots can provide much higher rewards than those from the early days. You may ask, how is that possible? How can online casinos afford to pay such jaw-dropping amounts?

Well, the primary sponsors of rewards are players themselves. They make contributions to the prize pool by playing games and placing bets. As we said, casinos allocate a portion of each wager to the jackpot.

For online slots progressive jackpots, this means that an operator takes 1% of your £5 bet on Mega Moolah and feeds it into the overall prize. On top of that, software providers deal with payouts on their games. Casinos can display progressive games from various companies and, if they had to pay for every jackpot, bankruptcy would be around the corner.

Instead, casinos only act as a middleman, and they organise the competition to see who will be the lucky winner. These days, progressive games come in several types, so let’s learn more about them.

As you noticed, we mainly focus on slot machines because they dominate the libraries at the best online casinos. Yet, other games can also have progressive jackpots, including poker and blackjack.

Nonetheless, all games with progressive jackpots come with one of the three primary systems:

In a way, these names are pretty self-explaining. The standalone progressive jackpots are available on only one machine. On the other hand, the local ones include slot games within the same casino. With progressive jackpot slots online, local jackpots could also refer to only one game, such as Mega Fortune.

Finally, we should explain the most frequent type of progressive jackpots on the current scene. The so-called networked progressive jackpots come with a lottery-type system. In essence, these games have a global reach, accepting players worldwide at many online casinos.

Knowing this, it’s not surprising to see that wide-area progressive jackpots offer the most lucrative prizes. The math is simple — the more players contribute, the bigger the pool.

Does Anyone Ever Win Progressive Jackpots?

As crazy as it sounds, multi-million rewards are up for grabs, and you only need to land the winning combination of symbols. Of course, this is easier said than done because the winning odds are also in the millions. Even so, real-life players win progressive jackpots, and some have done it repeatedly!

For instance, Jon Heywood from Cheshire claimed a life-changing prize of £13.2m by placing a 25p stake on the Mega Moolah slot game. The English soldier remained a record-holder for a while. To be precise, Mega Moolah again opened its treasure box, and in October 2018, an anonymous player collected a whopping €18,915,872.81.

Thus, players win progressive jackpots, and you may join the fortunate ones in the future.

Millions of players worldwide play progressive jackpot slots daily, with dreams about landing those eye-watering amounts. Both online and land-based, games with progressive jackpots are enjoyable and exciting. Yet, some attract more attention than others.

Of course, you’ll find these progressive jackpot slots at the best online casinos we reviewed.

We should also mention that progressive jackpots come in two types — open-ended and must-drop. These two categories relate to the game’s mechanism. As the name says, the open-ended ones are theoretically endless, and you could be waiting for the winning combination for years. Conversely, the must-hit-by jackpots come with a deadline or a set amount by which they have to reward players.

Now that we answered the question “How do progressive jackpots work?”, it’s time to check whether you are the chosen one. Just make sure you play only at legitimate online casinos. Also, don’t forget to bring your lucky charm! Winning a progressive jackpot is all about being as fortunate as possible.